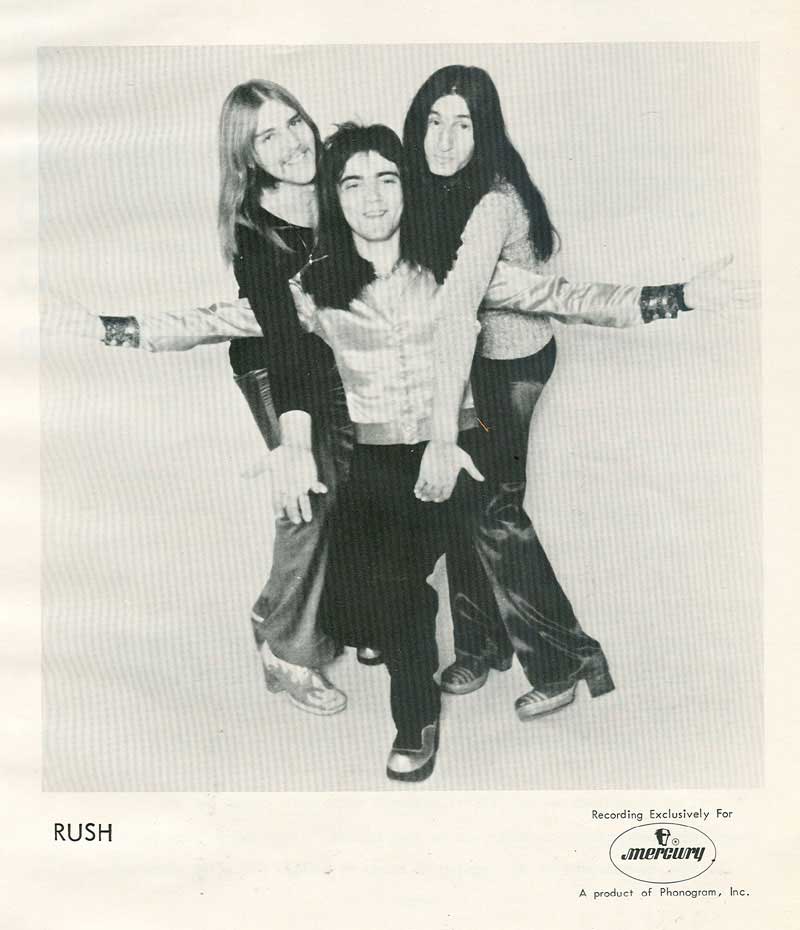 First Canada gave us the pop rockers, the Guess Who. Then came the heavy duty rockers, Bachman-Turner Overdrive. Now from the north country comes Rush, a three-piece group combining the best aspects of heavy metal and straight-ahead rock.

The music of Rush, as evidenced by their Mercury debut, "Rush," is surprisingly brash and refreshingly simple. No "significant" mellotron meanderings or eccentric electronics here. Just the high powered drive of a band that can shake down the walls of any hall it plays.

Like in Cleveland, for instance. Rush came down from its Toronto home to play a concert after an import version of the album began getting heavy radio play and listener response. "We opened for ZZ Top and were scheduled to play about 40 minutes," says lead vocalist and bass guitarist Geddy Lee. "Well, we played for one hour and the kids were standing on the chairs and screaming. We earned an encore, but ZZ wouldn't let us go back on."

Besides Geddy, the rest of Rush is Alex Lifeson on guitar and John Rutsey on drums. Geddy and Alex are 20; John is 21. Rush has been together five years, starting in high school, although it wasn't until two years ago that the members decided to devote their full energies to the band. About a year and a half ago, Rush began cutting what was to become its debut album for Moon Records in Canada (and eventually Mercury).

"We had offers from other Canadian labels, but we decided to do it ourselves," Geddy says. "We did part of the album at Eastern Sound in Toronto in early 1973, but figured we could do better. So in November we went to Toronto Sound to re-record some of it and totally remix it."

Alex adds: "The first stab at the album was done in eight hours following a gig. We were warmed up after the show, and it came very easy. Then it was recut in November in about three days, including mixing time. We were lucky in that most of the songs came in two or three takes."

Several months passed and the album came out in Canada and in June Rush's manager, Ray Danniels, flew to New York to get a U.S. booking agency. Ira Blacker of ATI heard the album, signed them, and forwarded a copy of the album to Mercury. Within days, the group was signed and the album was immediately prepared for release.

The LP is marked by Geddy's piercing vocals which complement the pile-driving music. "When we started out, we did a lot of Led Zeppelin material and I used to have to scream to hit the notes," Geddy says. ''My voice was naturally lower and more harsh. But when we started writing our own music, it was more suitable to have the vocals an octave higher than usual. Now it's all pretty natural."

As is the music. Cuts like "Finding My Way," ''Here Again," and "Working Man" have a flowing yet free wheeling quality. The Lp as a whole blends together with a feeling of spontaneity yet self-assuredness that belies Rush's professional experience.

Unlike many debut albums, "Rush" captures the group at exactly the perfect time: mature enough to know the rules of rock, and young enough to be unafraid to break a few to be distinctive.

For the first time in recorded history, a Canadian import LP was reported to Record World's Retail Report by Cleveland's Record Revolution. The RUSH LP, on obscure Moon Records, was broken wide open in Cleveland due to the airplay of WMMS-FM.

"High intensity" describes the music of a young band that draws its inspiration from The Who and Led Zeppelin; exuberant, unpolished, direct: ROCK.

WMMS-FM reports that "Working Man" and "Finding My Way" are the top requests from the album. "In The Mood" is the Canadian favorite and single candidate. "Here Again" is the other preferred cut.

Rush will be gigging six nights a week from. now 'til the end of the year with groups like Rare Earth, Kiss, Blue Oyster Cult, and Nazareth, and will soon be featured on the King Biscuit Flower Hour.

With the release of the third Bachman-Turner Overdrive album and the Rush album on the same day, we'd like to make one thing perfectly clear: Mercury has two Canadian Bands.