This Man Has Nightmares 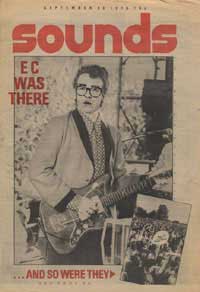 This man has nightmares. He's also lead guitarist for RUSH and writes songs about the politics of oak trees, shapeless spirits and The Real Truth

Determinedly striving for perfection, Canadian power trio Rush have been hard at work on their new album 'Hemispheres' since June. And now, a couple of months later, with the mixing of the record half complete, the strain is showing.

As with their last disc 'A Farewell To Kings', Rush recorded the new LP at rural Rockfield Studios, Monmouthshire. The choice was a natural one - away from the stresses of city life in their home town of Toronto, the Welsh studio retreat gave the band a unique opportunity to sever all contacts with everyday life, regular rock routine, and just immerse themselves into the activity of laying down a seventh album.

However, unlike last time when ideas were well-defined and fairly concrete, on this occasion Rush started from scratch... and it's been an uphill struggle all the way. Or, as band guitarist Alex Lifeson puts it, "This time around the troubles started from basics".

Two weeks prior to entering the studio were spent in intensive rehersal, during which time ideas were developed and discarded, germinated and jettisoned. As I understand it the band started to retreat within themselves, get somewhat insular... and began to worry a little about the exact direction the new LP should take.

And maybe because of this undercurrent of (mild) panic, the single number to emerge from the 14 day period has turned out to be very, very odd indeed.

"It's called 'La Villa Strangiato'," Lifeson reveals. "It's a nine-and-a-half minute long, 12 part instrumental track... it's really peculiar, really off the wall and totally unlike anything we've ever done before."

"That's right," Lifeson continues. "It's a - would you believe -musical recreation of some of my nightmares.!"

"Yes, seriously," interjects drummer Neil Peart, noticing the look of incredulity that's suddenly spread across my face. "Alex has some of the most bizarre bad dreams, especially when we're away touring on the road. Sometimes, when we're all supposed to be fast asleep in our hotel rooms, he'll wake up either Geddy (Lee, the band's vocalist and bass player) or me with a phone call in the middle of the night and start telling us all about these terrible dreams he's been having. When you're barely conscious, some of the stories he comes up with can be quite mind-blowing."

ALEX LIFESON on the couch where he belongs

As is 'La Villa Strangiato', too. The first couple of times I heard it (at London's Trident Studios, where Rush recently began putting the finishing touches to the LP) it struck me as being uncon-ventional in the extreme and totally at odds with the band's usual sword and socery/heavy rock musical stance. Frantic jazzy passages collide headlong with mellow, acoustic-based interludes... and although all of the dozen aforementioned sections of the track have individual titles, some are shorter than even a Wire cut. Initially the number left me terribly confused and (gasp) even uncertain if I actually liked it or not. And even now that I've got ahold of an advance tape of the LP and have had the opportunity to listen through 'La Villa Strangiato' a few more times, I still feel much the same way. Funnily enough, it keeps reminding me of 'The Sabre Dance'. Is that a good or bad thing?

Whatever. Accompanying 'La Villa Strangiato' on one side of the album are two other tracks. 'Trees' and 'Circumstances', both short, snappy and concise, very much in the same spirit as 'Closer To The Heart'.

'Trees' has an endearing, almost fairytale-type storyline, although it undoubtedly has deeper connotations.

"The song's about a forest full of maple and oak trees," Peart explains. "The maples begin to get uptight because the oaks are growing too big and tall and are taking all the sunlight away from them... so they form a union, and endeavour to get the oaks chopped back down to a reasonable size."

The other side of the album is taken up by the 'Fountain Of Lamneth'/'2112'-style, 20 minutes long title track 'Hemispheres'. And, as expected, it's the conclusion to the story begun by the number 'Cygnus X-1' on the previous platter. If you remember, the 'first episode' ended with Our Hero plunging his spaceship the Rocinante through a Black Hole in the constellation of Cygnus... never to be seen again?

'Hemispheres' ties up the tale in totally unexpected fashion. Even though Peart, in his own words, racked his brain, but still had 'no idea' how to end the story even when the band started recording, I think you'll agree that he's managed to concoct a convincing conclusion. And no, he hasn't copped out with any 'matter trans-portation' or 'other dimension' schtick... it's far more complicated than that.

I won't give too much away here and now as it'll spoil the enjoyment of you finding out for yourself, so for the moment suffice to say that Rush's full-blown 'Hemispheres' flight of fancy introduces two new characters into the scheme of things (Apollo, god of the mind; Dionysus, god of the heart), relates a battle between these two that brings a world to its knees and to the brink of armageddon, and includes the appearance of a 'shapeless spirit' that emerges from a Black Hole to act as mediator. And, as ever, it's not all as cut-and-dried as it may seem at first.

"I hope that whoever buys the album will feel moved to delve beneath the basic storyline," says Peart, "and find a real truth. It'll be worth the effort, believe me. I think it's something worth bringing to people's attention".

The album comes out in early October, so get delving.

Talking about more general matters, I was surprised when Peart revealed great admiration and respect for UK, that 'new British supergroup'. Previously I'd dismissed them as 'just another Hugh Fielder band', but Peart seemed so enamoured with them ("Especially Bill Bruford's drumming," he says. "He's flowered, improved vastly with this new outfit") that maybe I'll start from scratch, acquire another copy of their album and listen to it with an open mind... not to say ears.

And as far as the next British tour goes, you'll be delighted to hear that Rush definitely (no messin' around, as it always was the case with Kiss) will be playing this country in April and May of next year. Even now, at such an early stage, the band's date sheet is jam-packed with all of 30 shows, including several nights in London, Newcastle... just about every major city in Blighty, in fact.

Says Peart: "Despite the great receptions we enjoyed last time -when the Glasgow Apollo crowd started singing along to 'Closer To The Heart' it was magic, one of the best moments of my life -it was really difficult touring Britain in February, what with all the snow, ice and freezing cold dressing rooms...

"This time we're going to do it right."