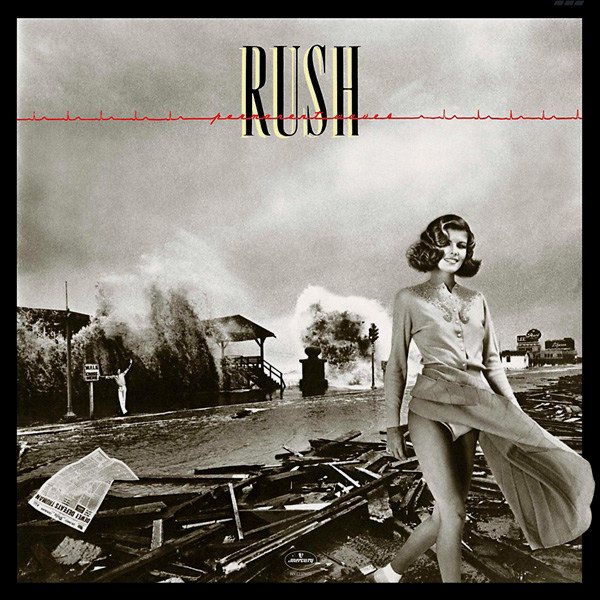 It's easy to criticize what you don't understand, which at least partly explains why Canadain power trio Rush have suffered so much at the hands of rock journalists since the band's debut album in 1974. Critics find bassist-lead singer Geddy Lee's stratospheric wails and drummer Neil Peart's lyrical excursions into philosophy, science fiction and fantasy easy targets, and usually dismiss Rush as a head-banger's Genesis.

True, earlier LPs like Fly By Night and Caress of Steel bear the scars of the group's naïvete. but now, within the scope of six short (for them) songs, Rush demonstrate a maturity that even their detractors may have to admire. On Permanent Waves, these guys appropriate the crippling riffs and sonic blasts of heavy metal, model their tortuous instrumental changes on Yes-style British art rock and fuse the two together with lyrics that - despite their occasional overreach - are still several refreshing steps above the moronic machismo and half-baked mysticism of many hard-rock airs.

Fortunately, Rush lead off with their trump card, a frantic, time-changing romp called "The Spirit of Radio." Not only is the sentiment right on, but the tune is packed with insistent hooks, including a playful reggae break that suddenly explodes into a Led Zeppelin-lik bash. Guitarist Alex Lifeson makes the most of these hooks with harmonic inversions and aggressive solo breaks, taking off in "Freewill" and "Jacob's Ladder" with a theatrical agility that could give Jimmy Page pause for thought. Other surprises are a straight-ahead rocker with an artfully segued acoustic chorus ("Entre Nous"), a dramatic Genesis-style ballad ("Different Strings") and an overall sanding down of the abrasive edges of Geddy Lee's voice, revealing a far more competent, expressive singer than his original Robert Plant-like shriek might have suggested.

Rush's problem has rarely been competence, however. They simply don't play fashionable music. If they couldn't cut it on their own terms, that's be different. But this band is among the very best in its genre. And if the Top Five status of Permanent Waves is any example, it's a genre wherein critics don't count at all.