Power From The People

Ignored By Critics And Radio, This Hard-Rock Trio Went Straight To The Fans

By David Fricke, Rolling Stone, May 28 1981, transcribed by Meg Jahnke 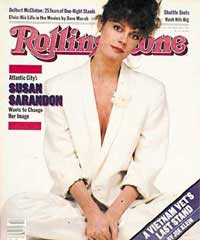 There are two schools of thought on the Canadian power trio Rush - for and against. Tonight, at the massive Montreal Forum, Rush are playing to yet another sold-out house and the lines are clearly drawn.

Taking the affirmative position are 14,000 French-Canadian fans, many of them wearing Rush T-shirts and scruffy denim jackets with the band's logo stitched across the back. They are vigorously pumping the sweaty, smoky air with their fists and yelling themselves hoarse as guitarist Alex Lifeson, drummer Neil Peart, and bassist-singer Geddy Lee roar through a two-hour set packed with tracks from nine of the group's ten Mercury albums -including their latest best seller, Moving Pictures. When Lee announces that the band is recording the show for an upcoming live album, the cheering and applause seem to shake the Forum to its foundation. And by the end of the lengthy encore, "La Villa Strangiato," the audience looks almost as exhausted as the musicians.

But one fan's meat is another man's poison. In the next morning's Montreal Gazette, reviewer John Griffin roasted the group mercilessly: singer Geddy Lee - whose banshee wail could pass the Memorex test - "sounds like a guinea pig with an amphetamine habit"; axeman Alex Lifeson, a master of high-volume licks, "is ordinary at best"; and Neil Peart's heady philosophical lyrics are summarily dismissed as "cosmic" Griffin signs off with one last slap, describing Rush as "one of the most tedious rock bands working the arena circuit today." The fans at that concert must have found it hard to believe this guy was at the same show.

"Yeah, I saw that review," Geddy Lee sneers in disgust. In the thirteen years since he and high-school buddy Lifeson - whose blond, angelic features make him look like Botticelli's idea of a rock star - founded Rush, Lee has seen a lot more like it. Sitting in the back seat of Neil Peart's black Mercedes, which the drummer is racing across the Quebec-Ontario border on the way to that night's gig in Ottawa, Lee shrugs his shoulders. "I saw the headline Rush: Pomp-Rock Trio Hot on Tedium and threw it away," he continues in a near whisper, a marked contrast to his bloodcurdling singing. "I didn't have to read it to know what it said. Hey, the reviews we got in Toronto [their hometown] last week were the first favorable ones we'd ever gotten there." Bad reviews have been a way of life for Rush since Lee and Lifeson, both twenty-seven, and Peart, 28, first started touring America in 1974, hot on the heels of their Led Zep-alike debut, Rush. Now, despite the longstanding scorn of many critics, as well as radio station program directors who deemed the group's brand of progressive aggro-rock unfit for airplay, Rush are finally enjoying the fruits of seven years' labor on the road. Last year's Permanent Waves cracked the Top Five and even sired the band's first major hit single, "The Spirit of Radio."

But the big payoff is Moving Pictures, which peaked at Number Three barely a month after its release, aced out of the top spot only by REO Speedwagon's Hi Infidelity and Styx's Paradise Theatre. Already gold and certain to go platinum, the album has also set off a chain reaction: older albums like 2112 and the live All The World's a Stage have gone platinum in its wake. Rush has now sold more than 10 million records worldwide.

Compared to earlier Rush epics like 2112, A Farewell to Kings and Hemispheres, with their twenty-minute concept pieces and serpentine rhythm changes, both Permanent Waves and Moving Pictures are paragons of heavy-metal commerciality. Five of Moving Pictures' seven songs clock in at under five minutes; the rougher edges have been shaved off Lee's voice; and on one number, "Vital Signs," the band even takes a shot at a Police-style reggae shuffle.

"The difference," Lee explains, "is in the organization of the music. We learned a lot about composition and arrangement in making Hemispheres. Permanent Waves and Moving Pictures are the result of application, of saying, 'Okay, we know we can do this and we learned all this. Now let's see if we can make a song out of it that'll really have a lot happening in it.' It's not just that the songs are four minutes long so they can get on the radio. It's the quality of those four minutes."

But the real secret of Rush's success is that they simply eliminated the middlemen. When FM radio stations ignored them, the band took their cause directly to the people, touring America with a vengeance and often playing as many as 200 concerts a year.

"At our heaviest," figures Lee, "we were touring seven months of the year and recording two months. We'd have maybe a total of a month off - and never at one time. It was hard, but we felt we had to do that because we weren't getting exposure any other way. Besides, we enjoyed playing, and what better way to learn your craft - to refine what you're doing - than to do it?"

As musicians, Lee and Lifeson have done all their growing up in the public. They first met in ninth grade and soon became veterans of the local basement-band scene. Together with a friend of Alex's, drummer John Rutsey, they cut their teeth at high-school parties and church dances with a repertoire heavy on Cream, Hendrix and Led Zeppelin covers. In the early Seventies, the drinking age in Ontario was lowered from twenty-one to eighteen, enabling Rush to hit the more lucrative bar and club circuit in and around Toronto. "That was really the point where we became professional," says Lifeson, "in the sense that we were all dedicated to doing that and only that."

Dedication, of course, was not enough to make it in Canada. "It was ridiculous," Lee grins, recalling some of the problems Rush ran into. "We played a pub night at a local college, and they kept telling us, 'Don't play too loud, we can't hear the beer orders.'" At one gig in Oakville, Ontario, they were fired after only half a set when neighbors complained about the noise. The band's awesome volume (Lee first developed his Robert Plant-like screech simply so he could be heard over the instruments) and their heavy-metal leanings won them few friends outside the province. "All the years we were playing bars and schools, we never left Ontario," Lee says. "We couldn't even get a club tour of western Canada. All of our prehistory took place in Ontario. We couldn't get gigs anywhere else."

They couldn't get a record deal, either. The band's manager, Ray Danniels - who got his start booking school dances for Rush when he was sixteen - released their self-titled debut album in 1974 on the group's own Moon label after it had been turned down twice by every major record company in Canada. Later that year, though, the album began getting considerable airplay in Midwest heavy-metal capitals like Cleveland and Detroit, and Mercury Records signed Rush in the US.

Rush's first American tour almost ended before it began when John Rutsey quit after a falling out with Lee and Lifeson. Neil Peart, another Toronto native who had previously tried his luck as a drummer in England, stepped in at the eleventh hour, and Rush hit the touring trail with the enthusiasm of kids given the run of a candy store.

"The strategy was, 'There's a gig. We'll go play it,'" says Lee. "If you look at our routing plans for those first four years, it was totally nonsensical. One time we went from Gainesville, Florida, straight up to Allentown, Pennsylvania."

"We went everywhere we could," says Danniels. "I was always more concerned with the cities we hadn't played than the ones we had. My philosophy was, if you can drive to it, do it. It was the drive-till-you-die philosophy."

And Rush did just that. Lifeson remembers renting a car in Toronto on the pretense of driving it up north for a few gigs. Instead, the band took it to the States for several weeks of shows opening for Kiss and Aerosmith. "We brought the car back with 11,000 miles on it. It didn't have any hubcaps left, the radio was smashed, the mirror was gone. It was ruined. They were quite surprised."

The pressures of constant touring, overwhelmingly negative reviews and no airplay, and the unspectacular sales of their third LP, Caress of Steel, had taken their toll. "No one could believe it was going so badly," says Lee. "Then we realized how stupid we were. Because of all these people putting pressure on us, we were looking at ourselves through their eyes. >From then on, we knew exactly what our direction was going to be, and we were determined to have success strictly on our own terms."

Rush have had their way ever since, although at no small cost. They tour with more than $600,000 worth or stage, sound and lighting gear in a caravan of four trucks, two buses and a camper. Lifeson says last year's Permanent Waves tour was the first time the band came off the road with a profit. More recently, Rush had to foot the bill for the cover art for Moving Pictures - estimated by designer Hugh Syme at $9500 - because, according to Ray Danniels, their record company refused to pay the full cost.

"We are not excessive," insists Neil Peart. "If something has our name on it, we try to make it as good as we can. We always think of the ideal Rush fan. When I'm writing lyrics or when I'm playing onstage, this ideal fan is watching every move I make to see if I make a mistake or if something is not as good as it should be. You just can't escape that judgment."

As Peart pulls his Mercedes behind the Ottawa Civic Center, where a sea of denim and Rush insignias is forming almost three hours before the doors will open, Geddy Lee tried to find a few kind words for rock critics.

"You'd have to be a fool to ignore constructive criticism," he says. "We've changed things in our music that were pointed out to us some years ago, things about feel or a tendency to sometimes sound forced. But a lot of critics believe they are the resident experts and they make the decision on what's valid and what isn't. I think that's horseshit."

So, apparently, do the fans, who have made Rush and fellow heavy-metal whipping boys REO Speedwagon, Styx and AC/DC the rules of the charts. And, as Ray Danniels points out, "when it came to concert reviews, critics almost always made the mistake of also criticizing the audience. If an eighteen-year-old reads a review that says, 'Rush were puke, they were shit, they were garbage, they have no talent' and ends with something like, 'The audiences were foolish enough to buy it,' that person thinks, 'Yeah? Well, fuck you.' And that's what's saved us in most cases."

"We know we're doing well when we can sit back and say, 'That's a good record; the audience applauds for it, they like it,'" concludes Lee as he heads for the arena's dressing room. "To make records people enjoy and that we enjoy playing - that's our measure of success."