By Neil Peart, Kerrang! No. 7, January 1982, transcribed by pwrwindows 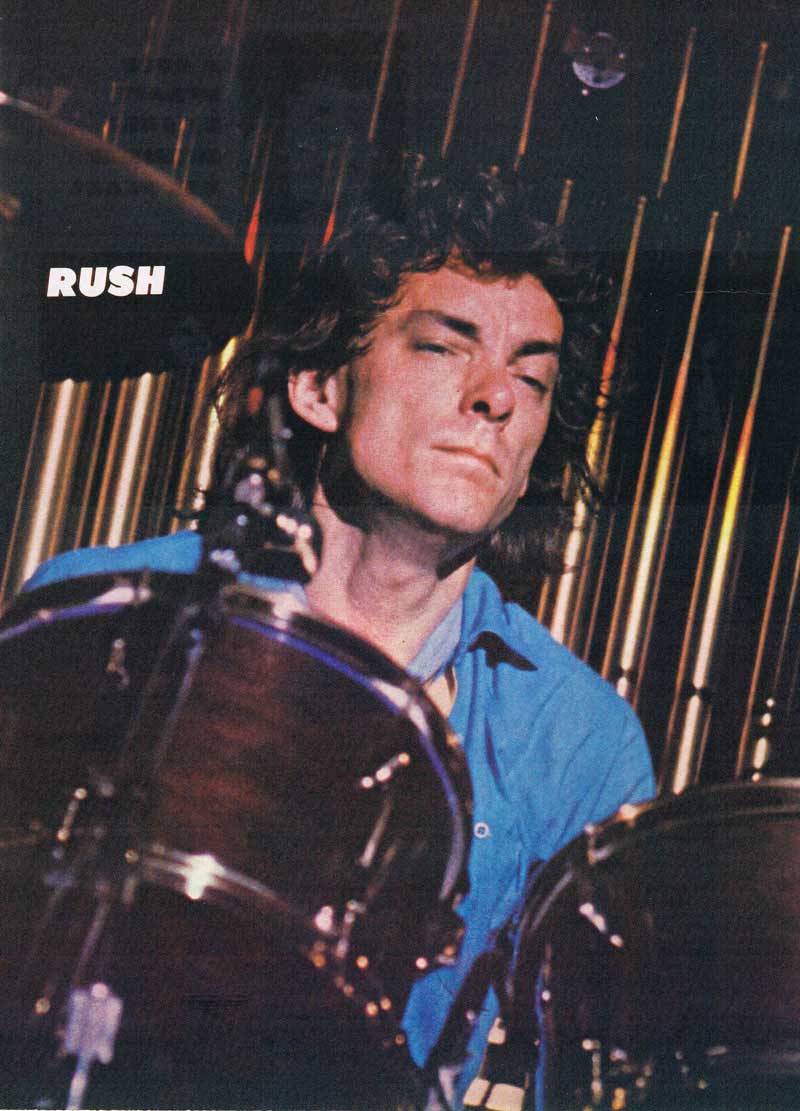 And then we - (what year was that again?), right, right. "Okay": So we went over to the UK, recorded some shows over there, some of which would make up side two of this live record, notably London, Manchester and Glasgow. The spontaneous choir of Glaswegians singing along with 'Closer To The Heart' is something we particularly wanted to capture, as it is a response native to British audiences, and sounds great! After that, it was - , it was "what"? Why am I asking you?

Wait, I know! We went out on tour again for about a century, through most of the US, and some of Canada. More shows were recorded: Toronto, Montreal, Ottawa, Vancouver and Edmonton, all of which show up on sides one, three and four. We also filmed the Montreal show, which we hope to put together as our first real concert film. We have made a few videos to date, both live and "lip-synched", but this is our first venture into film and we are very excited at the results. We'd never seen ourselves before!

What else? Well, we had a pretty good year, the album and the tour went very well, we became fast friends with the guys from FM, went to Cape Canaveral for the launch of 'Columbia', saw some good movies, read some good books, heard some good records - what? Oh, the "album". How droll.

Playing live and playing in the studio are as different as talking and writing. Both are very satisfying, and certainly equally difficult to do well, but one is spontaneous and irreversible, while the other is controlled and infinitely correctable. Like talking, it can also be a case of "the wrong think at the wrong time", and one ends up with a mouthful of feet (or drumsticks!). In the studio, however, it is more like writing something down; you just keep going over it until you get it right. And if you can't just throw it away. No problem. As soon as the extra microphones go up, and the mobile recording truck is in residence, somehow things are different. There's no ignoring it, and everyone feels compelled to be deadly serious. Whereas a show usually presents a fresh sheet, and "another chance to get it right", (thanks, Cameron), each take in the studio is "The One", and a lifetime commitment. (Well a few years, anyhow!) When the two worlds collide, it creates a real "pressure zone" for us. How well I remember the vision of two reels of recording tape revolving every time I hit the wrong thing, or broke something, or my brain went wandering in another dimension. Oh, sometimes we play pretty decently. Except when we "know" - it's "The One".

So there we were with 50 rolls of two-inch tape, off to the Laurentian hideaway of "Le Studio", to begin the selection and mixing of the best we could find. Yes, we made a few repairs. A part here and there would ruin an otherwise perfect song, caused by technical problems, a sudden out-of-tuneness, or the aforementioned "brains-in-other-dimension" for a moment.

So we patched up the odd bit here and there, of course nothing was added that wasn't there before. These things are easily laughed off and forgotten in the heat of performance, but hard to live with over the long term. It would be so much easier if we were just perfect!

Such as it is, we're all very proud of this one. Everything has improved so much since our last, somewhat uneven, live effort - "All The World' s A Stage". (That was by a different group). Once again it's a kind of anthology album, a summation of the live highlights of our previous four studio albums, and a couple of older reincarnations in 'A Passage To Bangkok' and 'Beneath, Between And Behind' (affectionately known as 'BBB' for obvious reasons). Then there's our smashing version of 'Ebb Tide' before 'Jacob's Ladder'. Exciting stuff!

The observant will notice that Broon gets the sole production credit this time, as we were too busy playing on stage during the recording, and too busy playing outside during the mixing. We did find time to write a couple of new songs, and even recorded one called 'Subdivisions', which we hope to mix and release sometime soon. It was nice for us to write something new all by itself, and then spontaneosly decide to record it just like that.

It's also got us excited about the prospect of our next studio album, which we will start work on next spring. After a short tour of Europe, a short tour of some of the places in America that we missed last time, and - wait a minute! It says "Time Off" here. There must be a mistake!