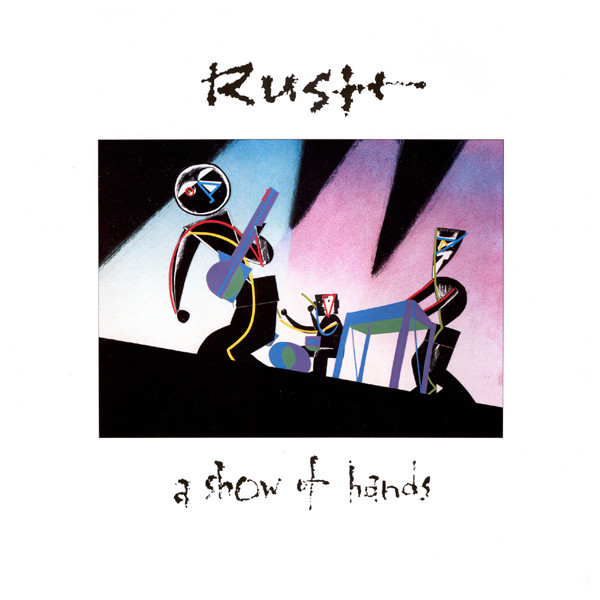 Transcriber's Note: This five page type-written chronology and essay was found in a case of promotional notch-cut copies of the A Show of Hands vinyl album shipped from Polygram. Neil's essay was previously published in the 1988 Backstage Club Newsletter as "The Drummer Sounds Off".

Yes, it's that time once more. A new live album, A Show Of Hands, is probably being released as you read this, or maybe a long time ago, or maybe not yet. But anyway, it's finished.

Choosing the material was difficult. We didn't want to use anything that had appeared on previous albums, with the exception of "Closer to the Heart", as it had that snappy "improv" bit at the end that we liked, so we decided to put it on. Other than that, all the material is from Signals on, except for "Witch Hunt", which hadn't been recorded for a live album previously.

Most of the performances came from the Hold Your Fire tour, many of them recorded in Birmingham England during our European tour in April, with others recorded in New Orleans, Phoenix and San Diego. "Mystic Rhythms" and "Witch Hunt" were recorded at the Meadowlands in New Jersey, during the Power Windows tour.

The CD giveth and the CD taketh away.

While the growing popularity of CDs and cassettes allowed us to make Hold Your Fire a little longer than a record likes to be, this time we were in the quandary of making a double-record set that we wanted to fit on one CD, so you, the hard-pressed consumer, wouldn't be obliged to shell out for two CDs. So we had to keep the time down to around 74 minutes, and had to be fairly selective about the songs we included. There are some we had to leave off which we would like to have included, and no doubt some of you will be disappointed not to find one or two you would have liked too, but we had to be ruthless. (And now we have no more ruths.)

The approach to sound was a difficult balance too. In retrospect we always felt that All The World's A Stage was a little too raw, and that Exit Stage Left was a little too refined, so we were trying to find the right balance somewhere in between. We're pleased with what we've got, and hope you will be too. We wanted it to sound good, but we wanted it to sound live too, and it's difficult to find the right meeting point sometimes.

There will also be a concert video to accompany this album, which Geddy is working on right now (I weaseled out of that job!). It was filmed during two of the Birmingham UK shows, and by all reports is going to turn out very well. Of course, that's another aspect of the live show that's very difficult to capture and reproduce; the visual performance. Really, it's impossible to record or film a live show in the way that either the musicians or the individual members of the audience experienced it, but again it requires a subtle blending of those varying, and sometimes diametrical, points of view. We can only try.

Here and now, in September 1988, we have just finished a summer of rest and recuperation from the Hold Your Fire tour, which ended in Europe at the beginning of May. The tour began the previous October, and so stretched over about seven months, and it was a difficult one for us. The pressure of the performances, the musical and technological challenges, and the scheduling were all very demanding, and we finished up tired, but very proud of the quality of the shows we were able to produce, and satisfied with a good tour.

Sometime in 1989 we will start work on a new studio album, and each of us is already at work on ideas for that project. But at the same time we're enjoying the luxury of a little more time than we usually take, time to become reacquainted with life, and explore some of its other interesting avenues. In our fourteen years together we have never lived a second without a deadline hanging over us, whether five minutes, a month, or six months away, and for once we haven't got any external pressure on us, so we're going to enjoy it for a little while.