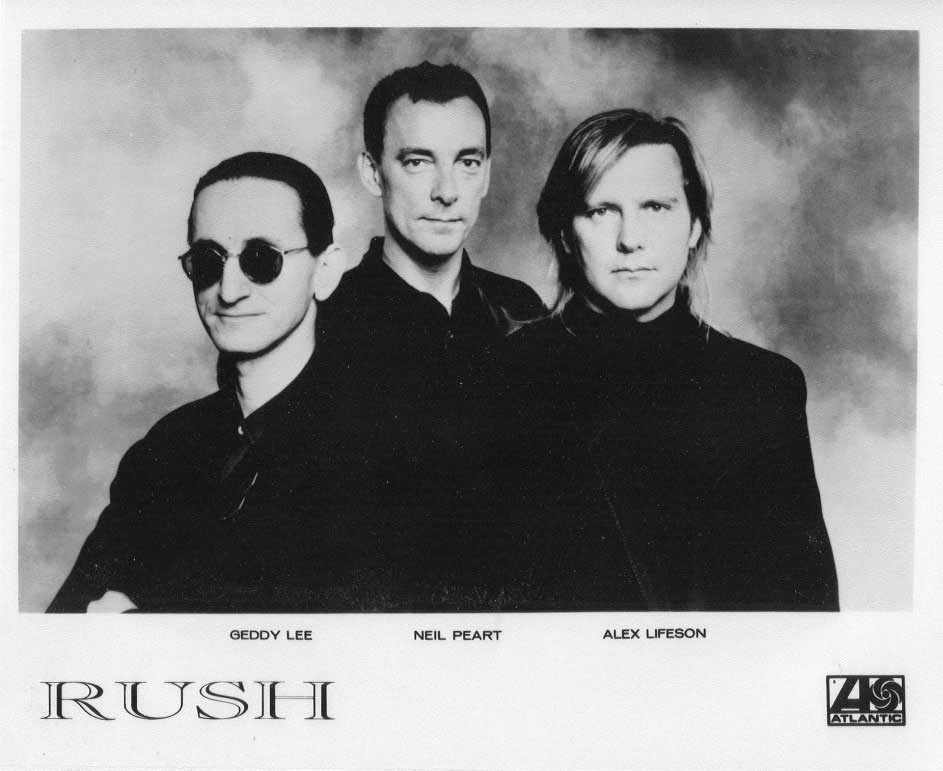 "'Superconductor' is about the facades of these groups - there's so many you could name.

"The music industry thrives on the packaging and formatting of useless and pointless ideas and people into something that the whole common denominator will accept and enjoy."

Rush have never been one of "those groups".

From Toronto, a classically-styled power trio, Rush produced in the mid to late '70s some of the most over-ripe epics in the history of rock. If fat and rococo, Rush's music possessed an IQ superior to that of those idiot rock monsters they shared bills with - Kiss, Aerosmith.

Largely fantastic, Peart's lyrics provoked a fascist controversy in 1976 with the '2112' album, inspired by Ayn Rand's Anthem, an anti-collectivist novel first published in 1946.

"We were labeled Nazi fascists," sighs Alex, "which was interesting to Geddy (Lee, bass and vocals) seeing as his mother spent five years in Auschwitz during the war."

Geddy was in fact born Gary, but his Jewish mother's heavily-accented mispronunciation stuck. He's since had his name legally changed to Geddy.

RUSH'S NEW LP, 'Presto', their first for Atlantic following 15 years at Phonogram, is typically detailed in sound and word.

"That's a common thing with our records," says Alex, suppin' Evian. "You require four listens before you can feel at all settled with it. The more you listen, the more you pick out of it.

"Neil's lyrics have never been easy or immediate, even for me. I have to read through them six times when we're writing just to get a basic idea of what he's saying."

"Absolutely!" he chuckles. "It doesn't mean anything, it was just a fun thing, but there's some great twists in there.

"Neil's into this mode of action and reaction, trying to get the absolute most out of every life experience, big or small. 'Chain Lightning' deals with that, life is a continuous spark of many things.

"There's a friend of Neil's who goes on these cycling trips and they got into a discussion about juvenile suicide. This inspired 'The Pass'. Suicide is a terrible way to try to solve a problem. No problem is so great that you should take that route.

"Adolescence is the most stressful part of life. I think that's the most powerful lyric Neil has written. Emotionally, it just triggered us - we'd finished the song by the next morning. It was one of those special things that just flows out.

"'Red Tide' is our environmental protest song," he grins. "And 'Presto' itself is about feeling more active in your heart than in your head, not having the answers to problems."

The core and motor of 'Presto' is Alex's guitar, and 'Presto' paints him as Rush's renaissance man.

"On the last three records ('Signals', 'Power Windows' and 'Hold Your Fire') there was always a bit of a fight between keyboards and guitar. They take up the same frequencies.

"On this record, I set the tone. We decided we'd go back to a more basic approach. I had my guitar and Geddy had his bass and we started writing like that, using keyboards for colour and enhancement, rather than writing on keyboards.

"We'd gone through an experimental phase from 'Signals' till now and it was a refreshing direction for us. We needed to do something that we felt was different. This record was very satisfying for us, especially for me. I felt much freer in the writing and playing of the record.

"On the last couple of records, I found I had to knit myself around other things, which I felt was fundamentally a wrong thing for me. The guitar is a very emotional instrument, and should be the lead instrument in a three-piece rock band.

"We've gone full circle, bringing all those things we've learned over the past six or seven years with regard to dynamics, songwriting and arranging, and applying them to a more straightforward approach. As a result, there's a lot more immediate emotion on this record."

John Mellencamp reckons the simplest song he ever writes will be his best.

"I agree. Your songs always sound best in demo form, when you've just put 'em down. Geddy and I work on a little eight-track recorder, and those tapes just have something to them. They sound great.

"The album comes out slick and produced and pleasing to the ear, but there's something so emotional at that very basic level, the little mistakes you make, it has an excitement and energy that doesn't get lost, but changes as the record develops."

You've no plans to release an album of demos?

"No," he laughs. "It would certainly cut down on our production costs, but I think those tapes are only really special to us."

'SPIRIT OF RADIO' slammed rock as industry. Integrity is at the heart of Rush's dozen albums.

"We always look in terms of the complete record. A single is not important to us. We have complete control. Our manager has never been in the studio with us."

The new record is more in tune with the simplicity of The Police than with Rush's past excesses. With 'Presto'. Rush have taken a step backward to take two forward.

"The last two records were real challenging to reproduce live. It required a great deal of concentration onstage - cue times, precision. And that weighs down on you. It's such demanding work, yet right from the beginning, the whole reason for being in a band was just to go out and have fun.

"We've been discussing the possibility of taking a keyboard player vocalist on the next tour just to take some of that load, so we can get back to centre stage, running around and having a good time.

"That," he smiles, "is a really appealing idea."