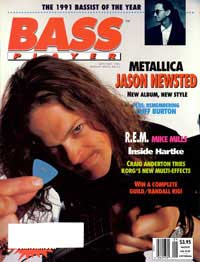 When the first "Special Edition" of Bass Player hit the newsstands in late 1988, the cover artist was Geddy Lee. Now, nearly three years later, the winner of our first Bassist of The Year poll is Geddy Lee.

Like a good bass line, this result has reassuring symmetry: Geddy was one of the first rock bassists to be the focus of a major band, and his enduring role as the frontman of Rush has provided constant, visible proof that the bass player is no longer just "the fat boy in the back" (to borrow a phrase from another high-profile bassist, Paul McCartney).

Geddy has garnered many honors in his long career, including enshrinement in Guitar Player's Gallery Of The Greats, but he remains modest and unassuming. When informed he was BP's first Bassist Of The year, he said, "That's very gratifying, and it really means a lot. I'd like to thank all the people who voted for me-I hope I deserve it."

Interestingly, Lee won this honor during a period of low visibility. Since last year, the members of Rush have been at home in Toronto, Canada, working hard on their next album for Anthem Records (dist. by Atlantic). When I spoke to Geddy in mid-June, he said the album-as yet untitled-was nearly completed: "We're all pretty excited about it. Things went smoothly this time, and we actually spent more time writing end pre-producing the material than we did recording it. It's hard to be objective when you're on the inside looking out, but this one's a little different. At least that's what we think-to everyone else, it probably still sounds like us!"

The new album, Geddy notes, will continue in the direction established on Presto: "In the studio, we've turned away from keyboards, back to more of a three-piece sound. Some of the new tracks are really just the three of us, although others are quite heavily orchestrated-we can't seem to resist that completely. One thing that's different about the album is the sound of my bass. l have a new Wal with a slightly larger body, and it has a deeper, more luxuriant tone, I'm quite pleased with it, and I think it's given the group a larger sound overall. On a couple of tracks, I went back to my other Wal-so those songs feature the twangy sound I've been using for the last few years-but most of the album was done with the new bass. That's something should be quite noticeable."

We'll be listening, Geddy, and we hope to talk to you again when you're on tour later this year. Until then-congratulations from everyone at Bass Player for inspiring our readers to name you the 1991 Bassist Of The Year.