Roll The Bones With Rush: An Interview With Geddy Lee 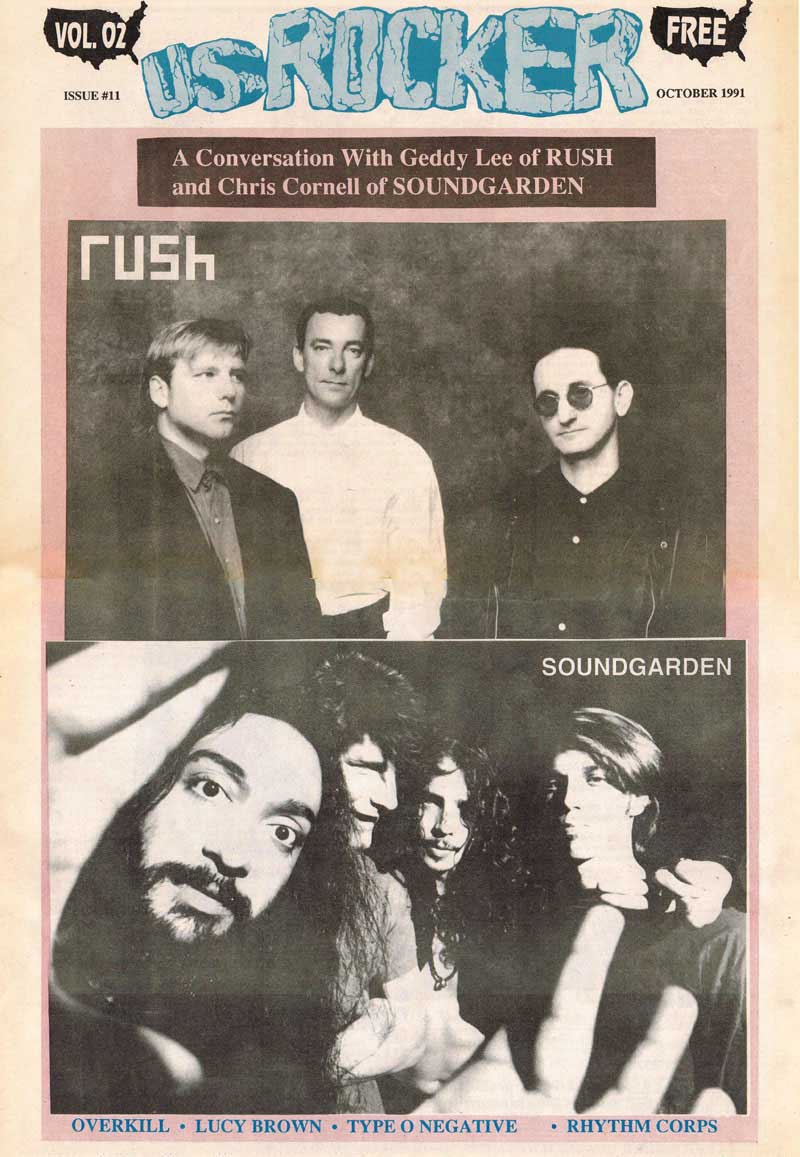 Rush's music has been the soundtrack for my life for the past 17 years. That's a very long time for anything to keep my attention. For most other things, I have an attention span of about fifteen minutes - tops.

I first became aware of Rush's music through my friend Dave, with whom I used to cruise around Columbus, (in the early 1970's); slamming Little Kings and listening to eight-track tapes. One of the tapes we listened to a lot, was a various artists thing he had made himself, which contained the Rush song, "In The End". That was the only Rush song I had ever heard, but it was enough to convince me that they were a band to be reckoned with.

The next time I heard Rush, was on my other friend Walter's ice cream truck, which I had hitched a ride on one day, trying to elude the police . . . well, enough of that story. They're probably still looking for me. Nevertheless, that day was the kind of day that sort of sticks with you. Which it did, along with Rush. Rush has recorded 17 albums in a career that has spanned the better part of two decades, and are now entering their third. In all that time, there has only been one personnel change, and that was in the early seventies. Those seventeen albums have covered a lot of musical territory, but always seem to ultimately be Rush. This is a hard concept to try to explain - you know a new Rush song by hearing the first few measures. It's a trademark sound that no other band in the history of rock music has ever been able to reproduce. I recently spoke with Rush bassist I keyboardist I vocalist Geddy Lee about the band's new album, Roll The Bones. I asked him how he felt about the new album.

"At the moment, I'm pretty pleased with it," he told me. "How long that will last, nobody knows (laughs). I'm pleased with the way the band has been able to streamline the sound over the past couple of records. I think it's a positive change. I'm also pleased with the way we've been able to utilize a stronger sense of melody and vocal harmony. I don't like every minute of it, but I like most of it. When you look back at a record you've Just finished, It's very hard to see what's successful. Most often, you see where you've fallen short. It's human nature; when you look in the mirror, you don't see what looks great, you see the blemishes. That's the way I feel when we finish an album, it takes me awhile to appreciate the good things,. because all I can see are the little details that are left unkempt. We can be dangerously obsessive at times. It can be a negative tunnel; that obsession for detail. This album had a real flow to it. A real strong, effortless flow - although we spent a long time writing, probably longer than we've ever spent writing. We spent ten weeks writing and rehearsing, which is probably why the recording went so quickly."

At this point, I mentioned that ten weeks wasn't really that long a period of time to spend writing songs - on the caliber of Rush's work.

"I guess not," Geddy replied. "When we were a younger band, I don't think we really appreciated that the songwriting part was the most important part. It always seemed to be the playing. The longer we're together as a band, the more we appreciate the time we allow for songwriting. From our sensibility at the moment, if the songwriting isn't there, then there's nothing there. That's the area we're most fascinated with at the moment."

I asked Geddy if the thrill of playing live shows had changed over the years.

"It's always a good feeling, and with a band like us, it's certainly a challenge. It's never boring up there, let me tell ya; you really feel that you've earned that beer at the end of the night. Yet, from a personal point of view, the real reason to keep going is the songwriting. That's the fascinating part."

Rush has one of the most stable audiences in rock music, I asked Geddy how he saw the audience responding to the band over the past few years. The bands newer material seems to be greeted with an almost casual acceptance, while the older material still brings the audience to their feet, roaring their approval.

"It's hard to analyze that sort of thing when you're in the band looking out. You look at it as everybody is going to have a favorite time period for a band. I certainly do for the bands I like. They become markers, real time-posts in your life. I don't know if there's an accurate word to describe what it is. Whatever it is, it represents way more than the song itself. It represents a lot of what you were going through when you got into that band. There's also an innocence attached to this kind of thing. It strikes a solid chord of recognition within people for different time periods. The older fans can appreciate the newer material, but it probably doesn't mean as much to them, because their lives are in a different place. Also, a band like ours that has gone through so many stylistic changes, pick up and lose fans with every album. Sometimes more come and less go, and sometimes it's the other way around. It's all fine with me, because it's what makes my life interesting and I really touch wood and am thankful that we have been given the opportunity to have an audience that has been open to what we've been up to."

Neil Peart, Rush's drummer and lyricist, is considered by many to be among the best writers in the history of rock music. I asked Geddy how he felt about Neil's lyrics.

"I think that it's a credit to Neil that he has been able to go from being a writer of broad abstractions, to being a writer of personal abstractions. Adding his point of view, and not being afraid to talk about some of his inner feelings has been a bold step for him, and one I think that hasn't gone unnoticed to a certain level of listeners. I've noticed that most of the great writers I've met are much more comfortable bearing their souls on paper, as opposed to face-to-face. I think that there is a portion of our fan-base that prefers it when Neil is talking about science fiction musing and throwing a lot of high-tech verbiage around, but I'm sure that there are just as many who prefer the more human side of his work as well."

Most Rush fans I know have one Rush album, and it varies from person to person, that they consider the bands best work. I was curious about which album, or albums Geddy felt the strongest about.

"I'm not asked that question very often. My favorite album is almost an impossible question to answer, because what I recall when I look back at records are sometimes things that have very little to do with the music. They represent different time periods in my life. Our albums, for me, are time capsules; they freeze a time period of my life on vinyl. It's sort of a fringe benefit . . . and a fringe nightmare of my job. When I look back on our work in terms of the albums that give me a satisfying feeling, I would have to say Moving Pictures is one of them; Power Windows, Permanent Waves, and 2112 of course, was a real arrival record for us."

With Roll The Bones, Rush has proven once again that artistic success and integrity can sometimes go hand in hand. If the band stopped recording tomorrow, they will have left one of the most impressive collected works in the history of rock music. I, for one, hope that they continue for as long as they remain satisfied with their work. Be sure to catch Roll The Bones Tour live in Cleveland on Sunday, November 17th at Richfield Coliseum.