A Farewell To Bings 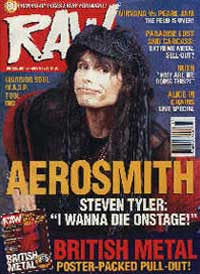 ... and bongs, and widdles and pars, as RUSH ditch the keyboards and get ready to Rock on their fab newie, Counterparts. And that's not the only shock in store, as GEDDY LEE tells HOWARD JOHNSON about the fights, rows and general weirdness that enter the equation when you're a member of the worlds leading Techno Rock Trio ...

It's hard to imagine that 12 years have passed since Canadian power trio Rush slotted neatly into the stndard "Heavy Rock" bracket. Nevertheless, the group still boast a hardcore fanbase, and earn healthy respect from Rock fans of every hue. But on the eve of the release of Counterparts, the bands eight album since '81's Moving Pictures, there's still a faint yearning that Rush will return to the fray armed wil bell bottoms, kimonos, word and sorcery lyrics and Alex Lifeson"s Jimmy Page hand-me-down riffs. Counterparts, of course, does noting of the sort. Rush have always been about progression rather than stagnation. And, secretly, I think that's how we like it.

"There are moments on Counterparts that are heavier than anything we have ever done in a long time," says Rush's mild-mannered vocalist/bassist/keyboardist Geddy Lee, hair cut to shoulder length and sporting blue, rounded Lennon specs. "But even if we became really heavy again it wouldn't be like the way we were on 2112. Those records were made in a a certain time and place and the only way we'd be able to recreate it would be accidentally. If we did it on purpose it would sound like bullshit."

Lee dosn't like bullshit. Fortunately, he's not at all reticent about discussing the band's past.

"A lot of the early stuff I'm really proud of," he says. "Some of it sounds really goofy, but some of it stands up better than I gave it credit for. As weird as my voice sounds when I listen back, I certainly dig some of the arrangements. I can't go back beyond 2112 really, because that starts to get a bit hairy for me, and if I hear "Lakeside Park" on the radio I cringe. What a lousy song! Still, I don't regret anything that I've done!"

And why should he? Alongside guitarist Lifeson and drummer/lyricist Neil Peart, Rush have grown old gracefully. Not too many embarassing moments, a remarkable body of work, plus solid success. By steadfastly refusing to pay any attention to whims and fads, Rush have sustained a 20 year career with ease.

"I don't know how to explain it", Lee offers, "I guess our fans are as weird as we are. And I think that they appreciate the emotion and creaftmanship that goes into our records.

"Every time I go into the studio to start on a new album I ask myself the same question: 'Why am I doing this again?'. The only answer that I can come up with is because of the satisfaction I get from creating and producing something.

"The three of us are very united in our work ethic. It's in our nature to want to improve the songwriting. Sometimes you spend ages trying to make a smooth transition from bridge to chorus in an emotional way and you'll finally achieve it, only to to find that you've already done it on a track ten years ago. You can end up chasing your own tail, so I tend not to look any further back than the last album."

Because you'd get too depressed?

"I don't get depressed. I just get startled!"

You won't be startled by Counterparts, which seamlessly continues the linear heritage started by '82's Signals and continued by Grace Under Pressure and '91's Roll The Bones. Sure "Stick It Out" nods its head a little more frantically than of late, but "Animate", "Alien Shore" and "Between Sun and Moon" sound like Rush doing what Rush do best.

All the more surprising then, that Lee reveals that this was the most fractious album Rush has ever made.

"The title came after the record, which isn't always the way it works. We're at that period in our lives where we're starting to question our relationahips with each other. You start to ask 'Why am I still hanging around with these guys?' To some extent Counterparts is a recognition of how the three of us have grown in different ways of the past few years.

"There were certainly a lot more fights during these sessions," muses Lee. "Almost every Monday morning Alex and I would have a full-blown, in-your-face argument. It was probably a good thing."

Lee doesn't sound too convinced, though.

"You could see it coming on the last tour," he continues. "Both Alex and I would have our moments, but our fights have always been very brotherly. When you spend more time apart you develop a stronger sense of what you like and what you don't like. Our musical vision certainly isn't as similar as it was, so we'd end up questioning each other more. When ideas come up that you're not comfortable with, it either leads to an agreement or an argument. The more confident you get as a human being, the more likely you are to stand your ground."

So who won this battle? Well once you've listened to the depth of arrangement on Counterparts, you'll probably call it a dead heat.

"Alex is very reactionary," continues Lee. "He must have said 10,000 times that he didn't want any keyboards on the album, so when I brought my keyboards into the studio there was an immediate atmosphere. He kept looking at them like they were really threatening. Now we wrote all the last album on bass, guitar and drums and added the keys at the end to embelish. That was the only reason the keys were there - or maybe to help me express myself when I was painted into a musical corner - but Alex was making assumptions that I wanted keyboards all over the place. It was a very volatile situation."

Rush aren't exactly what you'd call a party band. Still, according to their latest bio, a lot of their inherent humor is cruelly overlooked. Indeed, Lee assures me that they 'had hours of hilarity' in the studio when they weren't fighting. Why, then, own up to all the turmoil on planet Rush?

"It's just a way of tryng to dispel some of our myths," Lee shrugs. "We're a vert tight knit unit. I think we have the capacity to alienate people without realizing it. I've been told that coming into our dressing room isn't the most pleasant of experiences and it doesn't make me feel good to hear that. I'd like to feel that we were open and welcoming. We do have this cold, intellectual image and I can see where it stems from - we were kinda serious when we were young. It's not the whole picture, although I'm certainly not over here on a goodwill tour. I'm not working hard to be consider light-hearted, like U2, but there are a lot of preconceptions about Rush, some of which are correct and some of which are not!"

One particualr preconception is that Neil Peart rarely tackles subjects to do with love and sex. "Nobodys Hero" boldly addresses homosexuality and AIDS, and there's a sneaking suspicion that some of Rush's audience might find the whole affair somewhat controversial. Lee is unrepentant:

"If people think that discussing homosexuality is controversial, then they've been living under a rock. "Nobodys Hero" will probably polarise people, even though the AIDS issue is only a small part of the lyrical theme, and peple will probably jump to conclusions. That's their problem. I don't worry about it, whether it's brave or foolish or whatever. When things affet you, you talk about them and it comes out in your music. You let it fly. I never had the slightest idea that it could be interpreted as controversial until someone pointed it out to me after we'd finished the record. I guess I've always worked in the music business, which is very tolerant environment."

Rush, however has worked as an island within a fast running stream, never joining the main flow and keeping a healthy distance from the back-slapping and intermingling:

"We don't live in a very 'music business' environment", claims Lee. "The main reason why we aren't seen around is due to time. We keep getting offered a lot of stuff, but we made a decision seven or eight years ago that time that wasn't Rush time was our own time. It would be no holiday coming out of a Rush project and bouncing straight into another one with other people. I need time for familly, for personal travel, all kinds of interest outside of music. I don't know if that means we're less obsessed about music than most musicians or that we just get enough of our ya-yas out in Rush. But, like most things Rush, that's just the way it is."