Works On Paper: A Life Measured Out In Tour Books

Introduction to The Complete Tour Books 1977-2004; transcribed by pwrwindows 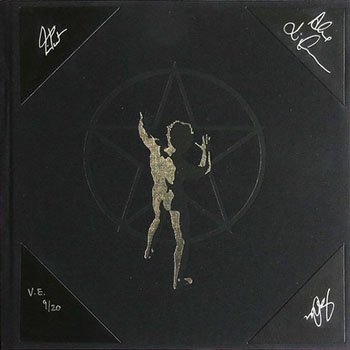 Behind all these tour books, there is a single story, an ongoing narrative, and it goes back to the very beginning. Like a fairy tale. "Once upon a time..."

When I first joined the band, in 1974, Alex and Geddy already had a few new songs they were working on, and we soon began dreaming up ideas for more, together. In one of my previous bands, I had written lyrics for a couple of songs, and as our new "all-touring, all-the-time" life began, I found myself with a lot of empty hours. I started filling those hours with reading, and that rekindled my childhood love affair with books - with words.

One of the first lyrics I submitted to Alex and Geddy was Fly By Night and when the time came to make our first album together, we decided that was a good title. (Our other candidate was Aurora Borealis, so we probably made the better choice.) As a bird lover since childhood, I remembered an illustration of a snowy owl swooping down toward the viewer with fierce eyes, and I suggested an image like that for the cover, maybe with the northern lights in the background.

It fell to me to talk on the phone to the record company artist in Chicago, and try to describe this picture in words. In the same way that writing those few lyrics for the band would lead to me becoming the band's chief wordsmith, that phone conversation led to me becoming the "graphic arts supervisor." Just as Geddy would eventually apply his interest in cinematic arts to rear-screen films and video, and Alex would apply his "musical scientist" talents to inventions and studio technology, I became responsible for the "works on paper" part of our little workshop.

In 1975, just before we recorded our next album, Caress of Steel, our manager, Ray, showed me an illustration by the keyboard player with one of Ray's other clients, Ian Thomas. The keyboard player was Hugh Syme, and thus began a 30-year collaboration between Hugh and me, on album covers, tour books, my own book covers, instructional videos, Buddy Rich tribute albums, concert DVDs - basically anything with my name on it, would have Hugh's name on it.

Hugh and I learned some lessons early on. We discussed ideas for the Caress of Steel cover, and Hugh drew the illustrations and even made each of the letters from acrylic resin, cast in three dimensions. However, someone at the record company felt inspired to make a few "creative" alterations, and when I first saw the completed album (in a record store in Winnipeg, as I recall), the illustrations were framed in bizarre fluffy clouds, and instead of the silvery, metallic look we had envisioned, the whole cover had an awful, washed-out tint of...let's say cold tea.

We were going to need some control.

From then on, with the artwork for 2112, All the World's a Stage, and onward, Hugh and I at least made sure things were going to look how we thought they would (though we still don't talk about Hemispheres). And through the years, even as the band's music continued to grow and improve, Hugh and I tried to keep elevating the graphic arts department.

Tour books came into the picture, and into the story, in 1977. For our first British tour, our record company over there printed up a...vivid little pamphlet, I guess you might call it. We didn't have anything to do with that one, best described as a "curiosity" (which is why we include it in this collection). Our first "official" tour book was for our A Farewell to Kings tour, which began later in 1977 and carried us - drove us - into 1978 (the infamous "Drive 'til You Die" tour). Hugh and I discussed layout possibilities and photo choices, but of course there was no time or budget to do anything fancy.

Still, some traditions were established immediately: an introductory prose piece written by me (each a clumsy experiment, but part of my writing apprenticeship), and a personal page by each of us with equipment details and such. In fact, that established another tradition - me having to hound Alex and Geddy at the last minute for their pages. Some things don't change.

And once again, Hugh and I learned some lessons when we saw the finished product:

It would take a few more years to get all those elements tidied up, but eventually the tour books got shinier, bigger, and thicker, and our hair, less so.

About two months before each tour, Hugh and I would discuss creative directions for the new tour book, deciding which graphic elements from the album art we might like to use (like with Test for Echo, when we used an alternate, moodier version of the album cover for the tour book), and how the whole thing might be "presented" - the thickness and finish of the cover stock, the number of pages, the kind of paper, the binding, the printing.

Then, Pegi at the office would enlighten us about the realities, limitation, and costs of all that, and we would adjust our visions accordingly. With Pegi, the "voice of reason" could be loud.

A large pile of photographs from the previous tour, and from more recent shoots, would pass by Alex, Geddy, and me for approval, then be delivered to Hugh to choose from in the final layout. I would write my little story and my equipment list, badger Alex and Geddy for their equipment lists (Alex's often hilariously insane, Geddy's friendly and sportif), and at some point in there, Pegi would tell me that the deadline was yesterday, and the tour book might not be printed in time for the first show.

(In the immortal words of master portrait photographer Yousuf Karsh, quoted in the Grace Under Pressure tour book in 1984, "That is not an answer I can accept".)

Whatever it took, I wanted those tour books ready for the first show, because they were important to me - partly because they fell into my "works on paper" department, but more than that, because I liked them. I had often bought tour books at other people's shows, and kept them as souvenirs, so I understood the value of them to the buyer, and it was (and is) satisfying to see that each of ours was nicer in every way than the one before.

Through all those phases, eras, and decades, we had the good fortune (and good taste) to work with some wonderful photographers, Fin Costello, Deborah Samuel, Andrew MacNaughtan, and more, and their images (and the changes in our images - all that hair) are certainly the main feature of this collection. Scattered among the photographs, like an occasional narrator in the documentary, are all those old prose experiments of mine, and they do tell some stories.

For all those reasons, I was excited by the idea of binding all our tour books together. Now, as I look through all those old pictures, and proof-read all those words, the whole collection feels to me like a combination photo album and diary. Like an old shoebox, full of snapshots and letters that capture so much of my life.

In "The Love Song of J. Alfred Prufrock," T. S. Eliot wrote, "I have measured out my life with coffee spoons." In this collection, I find almost three decades of my life measured out in tour books. That's better than coffee spoons, no question, but for me, the feeling is not nostalgia, for I would not care to live through any of those times again, thank you.

However, I do feel glad all that happened.