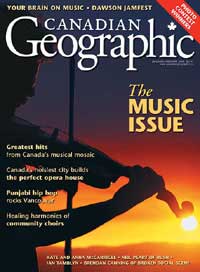 I grew up in the farmlands of southern Ontario, but I discovered my ultimate landscape, dreamscape and soulscape in Quebec's Laurentian Mountains. Bounded by the St. Lawrence, Ottawa and Saguenay rivers, this broad range of low hills, forested valleys, sparkling lakes and winding roads is part of the Canadian Shield, the glacier scrubbed remnants of the world's oldest mountains.

Over the past 25 years, the Laurentians have been a sanctuary and an inspiration to me, a place to create and to re-create, to reconnect with nature and with myself. I first travelled there in the autumn of 1979, when Rush recorded Permanent Waves at Le Studio near the village of Morin-Heights, Que. Set on 100 hectares of wooded hills, the studio was at one end of a private lake, the guest house at the other, and we were delighted to commute between them by canoe, pedal boat, rowboat or foot.

During our second visit, to record Moving Pictures in late 1980, I really fell in love with the area. The studio's assistant engineer, Robbie Whelan, introduced me to cross-country skiing, and I got seriously hooked. I found myself studying each day's weather forecast with a new urgency, judging the day by the colour of ski wax I would use, happily remarking to my puzzled bandmates, "Looks like a blue-wax day!"

Robbie had recommended the evening forecast with meteorologist Stuart Hall of Burlington, Vermont's Channel 3, and I started watching it religiously each evening. The language of meteorology in Hall's reports influenced me, and I even incorporated his words into our lyrics. Just before each day's satellite video, Hall would say, "Let's set the clouds in motion." This phrase became a metaphor in the song "Prime Mover": I Set the clouds in motion / Turn up light and sound / Activate the window / And watch the world go 'round. "Looking at the long range forecast" was Hall's nightly segue to the next day's outlook, and I worked that into "Turn the Page": Looking at the long-range forecast / Catching all the names in the news / Checking out the state of the nation / Learning the environmental blues.

Ernest Hemingway once advised fellow author John Dos Passos: "Remember to get the weather in your god damned book-weather is very important." As a lyricist, I thought that was good advice. After a few more experiments and a few years of owning my own log cabin in the Laurentians, that desire really blossomed in 1989 on our Presto album, when I managed to get a reference to weather into nearly every song. In "Scars," I squeezed in a line about my beloved Laurentian winter: Snow falls deep around my house / And holds the winter light. And in the song "Presto," I called up the stark beauty of a winter night with an imaginary character's personal reflection: I had a dream of a winter garden / A midnight rendezvous / Silver, blue and frozen silence / What a fool I was for you. And in "Chain Lightning," I celebrated the dazzling phenomenon of sun dogs in the winter sky and the Perseid meteor showers of August, then connected them to the light in my daughter's eyes when we shared those sights: Sun dogs fire on the horizon / meteor rain stars across the night / This moment may be brief / But it can be so bright / Reflected in another source of light.

During one lyric-writing session on a rainy, bone-chilling afternoon in the late summer of 1990, I built a fire and hunkered down with my papers and rhyming dictionary. I thought how nice it was to work like this. I'd been tinkering and fussing over the same few stanzas for three days, but now it was getting better.

No matter the weather or the difficulty of the work. I love my Laurentian soulscape. Sure, there may be mosquitoes, blackflies, horseflies, deerflies, ice storms, power curs and gloomy November days, but nobody's soulscape is perfect.

Neil Peart is the main lyricist and drummer for the rock ensemble Rush and author of Traveling Music: Playing Back the Soundtrack to My Life and Times. Rush's latest release is R30, a concert DVD from the band's 30th tour.