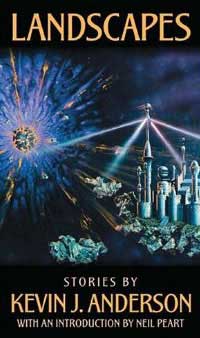 by Kevin J. Anderson
with an introduction written by Neil Peart

Includes the Rush inspired short story "Music Played On the Strings Of Time", originally published in the January 1993 issue of Analog Magazine.

In the late '80s, a novel called Resurrection Inc. arrived in my mailbox, accompanied by a letter from the author, Kevin J. Anderson. He wrote that the book had been partly inspired by an album called Grace Under Pressure, which my Rush bandmates and I had released in 1984.

It took me a year or so to get around to reading Resurrection. Inc., but when I did, I was powerfully impressed, and wrote back to Kevin to tell him so. Any inspiration from Rush's work seemed indirect, at best, but nonetheless, Kevin and I had much in common, not least a shared love since childhood for science fiction and fantasy stories.

We began to write to each other occasionally and, during Rush's Roll the Bones tour in 1991, on a day off between concerts in California, I rode my bicycle from Sacramento to Kevin's home in Dublin, California. That was the beginning of a good friendship, many stimulating conversations (mostly by letter and e-mail, as we lived far apart), and regular packages in the mail, as we shared our latest work with each other-the ultimate stimulating conversation. In subsequent years I would send Kevin a few books of my own, numerous CDs and DVDs from my work with Rush, and there seemed to be a fat volume from Kevin arriving about every other month.

Back in 1991, though, Kevin was still working full-time as a technical writer at the Lawrence Livermore National Laboratory. He spent every spare minute working on his fiction, and though he would famously collect over 750 rejection letters, there was no doubt in Kevin's mind about his destiny. Even as a child, Kevin didn't "want to be" a writer when he grew up; he was going to be a writer.

And so he was. To date, Kevin has published over 80 novels, story collections, graphic novels, and comic books, and he still spends every minute being a writer. Kevin doesn't write to live, he lives to write.

He has even found ways to weave his recreation, relaxation, and desire for adventure and physical challenge into the writing process, carrying a microcassette recorder on long hikes throughout the West, including the ascent of each of Colorado's 54 "fourteeners," (peaks over 14,000 feet).

In a recent exchange of e-mails, Kevin and I were discussing writing styles and habits, and he offered this revealing passage:

A long time ago, my friend and collaborator Doug Beason made a joking comment when I suggested that I needed a break, a sabbatical. He said, "Kevin, if you ever stop writing, your head would explode!"

And I knew he was right. My imagination is stuck in overdrive, for better or worse. Instead of a writer calling for a Muse to give him an idea, I've got a hyperactive Muse that won't leave me alone.

I feel as if my head is a pot filled with too many popcorn kernels, popping away, filling the container and pushing the lid up, and unless I keep shoveling the new stuff out, the whole thing will blow up on me. I'm writing as fast as I can to keep the growling, slavering Ideas from nipping too close at my heels.

There was a US News & World Report article a few months ago about a newly "found" disease they called "hypographia," the compulsion to write. They said writers like Sylvia Plath and Tolstoy were so obsessed with writing they often wrote as much as a thousand words a day. (A thousand words? Man, I've done over 10,000 words in a day!) I guess I'm an addict.

I'm picturing you as a guy with a similar compulsion to drum, slapping your knees, the furniture, the walls, feeling a rhythm in your blood. It's what you do. For me, stories are the drumbeats inside me. I'm always fabricating stories, characters, weird locations, plot twists. I'm just not happy "relaxing." Sometimes I'm just banging around having fun, goofing with toys that I enjoy-as when I write Star Wars or comics or light books like Sky Captain; other times I'm intense and working on something I think is Really Important, like Hopscotch. The "Seven Suns" books are a little of both, the biggest and most challenging story I've ever told, but damn, I'm having the time of my life with it, too.

I've been saying for years and years, "soon I'll slow down and take more time to smell the roses." It'll never happen, I suppose, because I just love the writing so much. Three days ago I started writing Seven Suns #5, and I was in absolute euphoria plotting the 112 chapters. This happens, then this happens, then this happens-I was discovering what my beloved characters were going to do, where they would end up, who would die, who would triumph. I came up with some twists and new ideas that were revelations to me, real lightning bolts from the hyperactive Muse-and best of all, they were so logical and inevitable in the universe of the story, that it seemed as if they were sewn into the fabric of my imagination from the very beginning, but I just didn't realize it yet. Now that's cool.

So, yes, I would like to have that sense of stillness and the time to pay attention deeply to the things around me . . . but on the other hand, I can't wait to see what happens next in the new novel that's just over the horizon.

And Kevin Anderson's horizons are wider than most infinite, really. His imagination roams the entire universe, creating strange new worlds and peopling them with strong, believable characters.

From the philosophical depth of Resurrection Inc. and Hopscotch, to the novelizations for Star Wars and The X-Files; from the genre of "historical fantasy" (which I think Kevin invented-richly-imagined tales about Jules Verne, H. G. Wells, and Charles Dickens), to the breathtaking scope of his "imagineering" in the Seven Suns series, there have been so many excellent works that have delighted this reader, and millions of others.

Among seemingly overlooked treasures, I fondly remember the fantasy trilogy, Gamearth, Gameplay, and Game's End, now sadly out of print, but there are also Kevin's collaborations with Doug Beason, like Timeline and III Wind, and the ongoing, highly-successful Dune series with Brian Herbert.

In writing to Kevin in response to reading one of those, The Butlerian Jihad, I talked about the subtle skill of his craft:

More and more I notice how truly masterful writing, yours and others leaves the reader with an overall impression of making it all seem easy-regardless of how much work has gone into the craft, the background, the research, and the intellectual underpinnings (or maybe because of all that), it just breathes off the page in a smooth flow of seemingly-inevitable revelations.

I know I've made similar comments about drummers before: some of them try to make simple things look difficult and impressive, but the true masters make the impossible seem easy.

It doesn't seem fair to the creator of that carefully-wrought illusion, undermining all the effort and experience necessary to operate at that rarefied level, but it's the ultimate nature of mastery, I guess. (It may be lonely at the top, but it must feel better than being at the bottom!)

In late 2002, toward the end of a long American tour that had me drained and feeling sorry for myself, I wrote to Kevin:

One bright spot I can report along the way is that during some idle hours in the tuning room, on the bus, and in hotel rooms, I had the great pleasure of reading Hidden Empire.

First of all, I have to tell you that if you or anyone else had any doubt, I think you have achieved a true Masterpiece with this book-meaning that term in the sense which you clarified for me years ago. It is definitely a piece of work to lay alongside those of the Masters, to be accepted by them and by the great abstraction of "the Audience" as one of the pantheon of masters yourself.

Congratulations. I really think it is a great book. I was so impressed by it at the time, and also after the fact-a true test of quality, I'm sure you'll agree.

The craftsmanship alone is sheer perfection. The architecture of the storytelling moves forward with grace and economy, combining girders and panels of deft characterizations, wondrous settings, admirable "imagineering," and all the superstructure of pure thought that has preceded all that.

(The reader will have observed by now that when Kevin asked me to write this introduction, it was easy to say yes-I knew the important stuff had already been written, either by me or by him. I would only have to look it up!)

Here are some of Kevin's thoughts on "style," from a recent exchange of e-mails on the subject:

I think in a letter to you many years ago, I talked about creating believable worlds and scenes; one of the vital tricks I mentioned was to nail down a few small but very precise and mundane details (the color of a piece of lint, the brand of a gum wrapper wadded up in a gutter), and the reader will buy into the rest of what you're describing. It seems easy, seems transparent. It's simple to show off, to be flashy and flamboyant, to prance around and point at marvelous overblown metaphors. It's more difficult to be subtle.

To which I replied, in part:

Another note about writing style that occurred to me in connection with what I wrote the other day: I just finished Gabriel Garcia Marquez's memoir, Living to Tell the Tale, and he described his early decision as a writer to avoid all adverbs of the "ly" sort (mento in Spanish, I think), and how it became almost pathological with him, just a Hemingway tried to cut every unnecessary adjective.

In your case, with the necessary "mission" of describing an entirely imaginary universe for the reader, it would seem especially difficult to avoid extraneous adjectives and adverbs-and yet you do, making the descriptions of planets, cities, palaces, customs, and technology fall more-or-less naturally into the ongoing narrative. And . . . you make it look so easy.

As we have discussed, that is the highest level of craft, and yet the least likely to be admired, or even appreciated. Once I offered a definition of genius, in particular reference to Buddy Rich: "Doing the impossible, and making it look easy."

And yes, Kevin does make it look easy, though of course it's not. He works to a very high standard of quality in his writing, from the conception to the execution, and these stories are a testament to the consistency of his art.

When people have called him lucky, Kevin likes to counter, "Yes, and the harder I work, the luckier I get."

As one of his appreciative readers, I think the harder Kevin works, the luckier we get.