In Conversation With Geddy Lee

The Canadian icon, whose band Rush is in the midst of planning a 41st Anniversary Tour, spoke with Jessica Allen on how he came to collect (and drink) wine, underappreciated varietals, other rock star oenophiles and improving with age 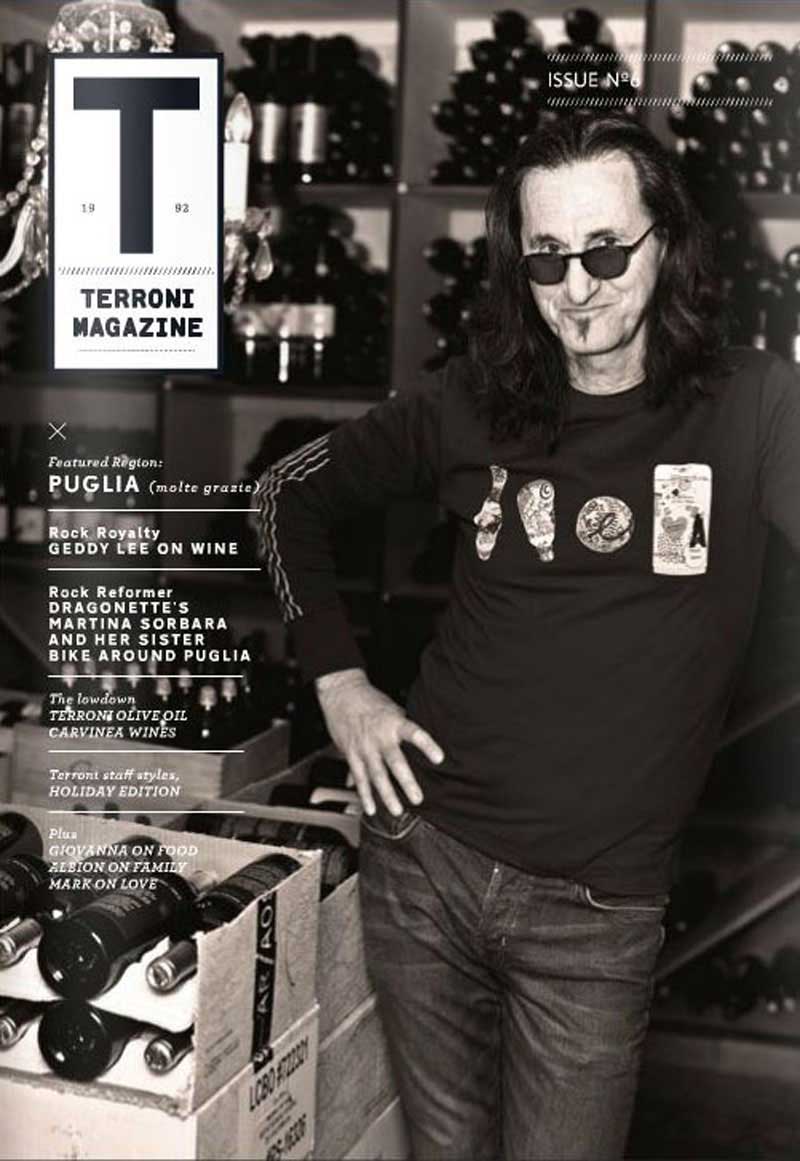 How long have you been collecting wine?

I was trying to think about that this morning actually, because I knew you'd ask me. I started collecting wine probably in the mid '80s but not in a serious way. It wasn't until the late '80S that I got more serious about it.

I read that you built a modest cellar in your home but your collection quickly outgrew that one so you had to construct a second. Has your collection outgrown your cellar space or is it still hovering at around 5,000 bottles?

I don't like to talk about how much wine I have [laughing] but I have surpassed that. I also spend a lot of time out of the country so I have wine in those places, too.

Was it love at first sip or was a taste for wine something that you acquired over time?

Well, what happened with me was when I was touring in the late '70s, we were starting to get a little successful in America and promoters would always ask our manager, "What can I buy the guys and leave in their dressing room?" So Alex, my guitar player/partner, he was always into wine before I was so he would always say, "Great wine. Great Bordeaux." So we would get these great bottles left for us. He would drink his and I would take all mine home because I wasn't really fanatical About wine yet and I had a little wine fridge and I kept them safe and sound. At first I acquired a taste for Bordeaux but after many years of trying different wines, I discovered Burgundy and it changed my life, my palate and I completely crossed over to the other side-the pinot side.

Was there a particular eureka moment? Do you remember where you were?

I do. I was travelling with a friend in the south of France, in the Rhone Valley, actually. In fact it was at a restaurant near Condriueu in northern Rhone called Le Beau Rivage, I think. We were going to a friend of ours who is a well-known winemaker in the northern Rhone who makes syrah and we were going there for a big tasting that afternoon but we just stopped for a quick bite beforehand. On the wine list they were having a sale. which in this country would never happen. And one of the wines was a 1978 musigny by the Comte du Vogue, a very rare and amazing Burgundy. This was probably almost 15 to 18 years ago now. And so my friend, who was a much more experienced taster than I, said, "We have to drink that wine, especially because it's on sale." I said. "But we're going for an afternoon of tasting! Aren't we going to be three sheets to the wind before we get there?" He said, "Don't worry about it. We have to drink this bottle." And we drank it and it was amazing. From then on, I was completely hooked on Burgundy. You always remember those great, great bottles. You can't forget them.

I'd be remiss if I didn't ask you what your favourite Italian varietals are.

I love the wines from Piemonte. I'm a big Barolo and Barbaresco lover and have been for quite some time. I also like the wines from Friuli-Venezia Giulia, primarily the whites. They're making some really interesting wines and a fantastic food culture exists there. My wife and I just spent 10 days in Friuli this past fall trying wines and driving around and eating well. Basically, indulging ourselves. It was fantastic.

I've read that you're an avid traveler. Is sampling locally produced wine, if the country you're in indeed produces it, import ant to you?

Yes it is. I'll give you an example: last year my wife and I spent a month in New Zealand. And I'm not a big New World wine fan but seeing as we were going to be there for a month 1 thought, well you know, I should try. So every night I made it a project to try a different pinot noir. I came away from the country with about four or five New Zealand pinots that I absolutely love. It was good for me, helping to lose that French wine snobbishness that I happen to have. New Zealand makes, in my view, the best pinot noir outside of France.

Now bear with me here, but Louis Pasteur once said, "A bottle of wine contains more philosophy than all the books in the world." And Rush lyrics are famously philosophical. Any chance that you imbibe in wine to help fuel the writing process?

Absolutely not! [Laughing] I imbibe in wine to forget the writing process! I drink coffee to inspire the writing.

Do you know of any other rock stars who are oenophiles?

Oh yeah! Maynard [James Keenan] from Tool is a huge wine lover and a wine producer. He owns vineyards in Arizona where he's growing and producing wines. He also buys wine from California and brings them in. He goes to wine shows and pours wine for people. He's a fanatic . Les Claypool, my good pal from Sonoma-and the bass player from Primus and other many idiosyncratic projects-is also a winemaker. He has his own vineyards in Sonoma and makes pinot noir. And he's claiming he's making one of the greatest roses on earth right now and if it weren't for the LCBO he'd be shipping them up here for me. When I get together with him in California we go out for dinner and share wine together. He's trying to convert me to California pinot because he knows I love Burgundies-and he loves Burgundy-but he believes that there are a lot of small producers that are doing more Burgundian-style pinots in California these days. After my experience in New Zealand, I'm open to it.

Is there a bottle in your cellar that you're saving for a particularly momentous event?

For me, opening wine is a momentous occasion. So whenever I have a fellow Burgundy lover I'll open anything in my cellar. I save my best Burgundies to drink with other Burgundy lovers but it doesn't have to be a special occasion; it just has to be that they're there and willing. I do keep certain bottles from my children's birth years that I want to share with them on momentous occasions for them, so that's a little thing I do. And I collect wines from my birth year to try but they're getting a bit long in the tooth now, as am I. So it's time to drink them up.

My son enjoys wine. He's not a fanatic but he keeps a few bottles at home and whenever he visits dad he goes away with a little variety pack. He does love to come out with myself and a few of my older wine geeks and he loves that experience of eating good food and sharing the wine - I think he loves the experience and the bon amis of that situation. Part of being a wine lover is the ritual of the meal and the good atmosphere of being with three or four of your favourite drunks and sharing good food and good wine. My daughter is 19 and she definitely has an interest in wine and when we're out together she likes to taste but she's not in a price bracket where she can afford good wine yet. She's still in university so she's happy with a good glass of something that I will suggest for her.

Is there a grape varietal that you feel has been overlooked? An unsung hero?

Well that's an interesting question. I think in Friuli they're producing friulano and I think that's a grape varietal that not many people are aware of. And riesling gets categorized as a lesser grape varietal to many people, except for real wine lovers. They really appreciate the diversity of that grape, in particular Austrian riesling. It's among the most delicious wines you can drink right now in terms of white s. In terms of red wines, there are so many varietals I don't know if there's an overlooked one. I would say that great Beaujolais crunot Beaujolais Nouveau-but great Beaujolais is a very underappreciated and flexible wine that is inexpensive and in the first five to seven years of its life, it's really delicious. And it's quite interesting to drink.

Is there a Rush album that you feel was critically overlooked?

It's hard for me to have perspective on that. Most of our work is critically overlooked. Our fans have sustained us all these years and as time goes on we've become more critically accepted. So, either we're getting better or our fans have become critics, one or the other. Anyway, it's all gotten better over the last 20 years. For some reason we seem to be improving with age.