The Rush Man On Life And Love Outside The Band 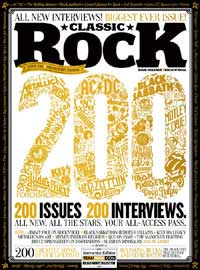 How did your parents react when you told them you wanted to be a musician?

It was hard for my mother to accept. She was from the old country, Poland, and a survivor [of Nazi concentration camps during WWII]. When they came to Canada my parents' dream was to escape the horrors of the past, to see their children grow up and be professional people - a doctor, a lawyer, something with stability, not a musician.

You later discovered that your father had been musical.

Unfortunately I lost him when I was only twelve years old. But I later heard a story from an aunt that he had a balalaika and wanted to bring it to the new country. And I guess my mum gave him a bad time and it didn't make the journey. Other relatives said he played at bar mitzvahs and weddings. But he always kept his love of music hidden from us. That still makes me sad.

Did your mother eventually come round?

She did, but it was a painful transition. She didn't equate the music I was playing with music, but with a lifestyle that would bring me ruin, drugs and so on. My grandmother was still with us at the time, and would take care of us while my mum worked. Alex [Lifeson] and John Rutsey [original Rush drummer] would come over and rehearse with me in the basement, and it would drive her insane as well. She thought we were devils.

You and your wife have been married for thirty-eight years. That's a lifetime in rock years. What's the secret?

We came together and made a decision to make this work. But there were times when it was difficult. We had a close call when my son was young and our touring schedule was so frantic. My wife and I have known each other a long time, but it doesn't matter how well intentioned you are. When you're absent so much, it was very hard to stay married.

Was readjusting to family life difficult after being on the road?

Coming back off tour wasn't so hard for me, but the absence created huge gaps in your ability to communicate with each other. You end up developing independence, and it's hard to mend the gap and act as a duo, rather than two solo acts. I'm very fortunate to have my wife. I adore her and we're the best of friends.

Has it been easier keeping Rush together as there's only three of you?

Definitely. We find it so easy to communicate with one another.

You and Alex have known each other since school. When Neil Peart first joined did he feel somewhat on the outside?

I think he felt alienated by the length and depth of my relationship with Alex. We're like brothers. It took a while for us to bring Neil into the fold. But as time goes on you become enamoured with the new guy, and there's nothing like the ups and downs of life in a rock band to forge deep friendships.

Did you ever consider adding a fourth member to the band?

We considered it. I'm a bass player first, a singer second and a keyboard player a distant third. But there were times in the early eighties when I was doing more and more and I felt like a drowning man. What happened is the technology developed around us, and Alex and even Neil could help. We developed into this three-man band that felt like a one-man band.

Was there ever a time when you fell out with each other?

We never drifted apart as friends, but there were times when we'd spent too much time on the road and needed time apart. After the early eighties, when keyboards took a more profound role in the band, Alex felt frustrated and felt the need to make a statement, and made a solo album [1996's Victor]. He needed to get in touch with himself.

Was your own solo album an escape from Rush as well?

Mine [2000's My Favorite Headache] came from a different place. I'd intended to do something when Rush took their next break, in 1997. But this was right around the time when a terrible tragedy struck Neil's life [Peart's wife and daughter died within ten months of each other], and everything took a back seat. When the dust settled, I thought it was the end of the band, and took the up solo album idea again as a way of staying sane.

Are you a good parent?

My mum was a very strong woman who raised three kids against all odds. She was an inspiration. We raised our children in a world at peace. We didn't raise them in the lap of luxury, but we had means to send them to good schools and take time to parent. My mum never had the time while working.

Are your children Rush fans?

I don't think so! I think it was difficult for my son, as a teenage boy in Canada, where we're considered very mainstream. I think it was hard for him at school to be independent, so he tried to create a life away from being my son. He's an academic now and I'm incredibly proud of him. And he's about to become a father himself. I think it was easier for my daughter, as a girl at a girls' school, because they weren't so bothered about Rush and my kind of music.

So Geddy Lee is about to become a grandfather?

We're gearing up for it. We've been putting it off for a long time.